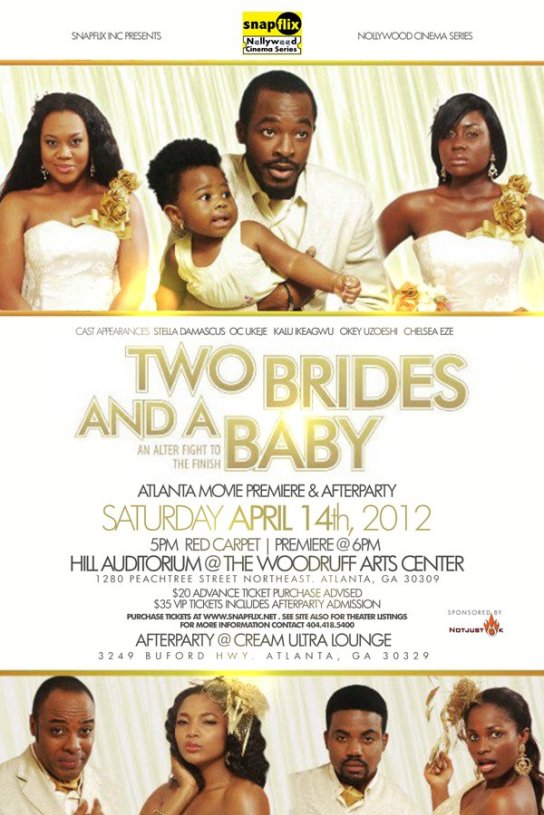 THE NOLLYWOOD CINEMA SERIES KICKS OFF IN AMERICA WITH THE PREMIERE OF BLESSING EGBE’S ‘TWO BRIDES AND A BABY’ IN ATLANTA, GEORGIA ON SATURDAY, APRIL 14, 2012.

Two Brides and a Baby is a must see movie. I really loved the way that this movie was brillantly done by Blessing Egbe, the cast were fantastic.  I love how Blessing was able to bring emotional nuance to her role in the movie.

Following the huge success of Nollywood films in cinemas across Africa and the UK, Movie lovers in the US, Canada and Caribbean can now enjoy Nollywood in American Cinemas courtesy of SnapFlix Incorporated, a distributor of African media content in the USA. The new brand, the ‘Nollywood Cinema Series’ is an ongoing showcase of new breed, top quality Nollywood movies (being referred to as the “New Nollywood”) in Cinemas across major cities in the Americas. The initial lineup of cities for the series include Atlanta, New York, Los Angeles, Chicago, Dallas, Houston, DC/Maryland, Toronto and Kingston, Jamaica.

The movie has received rave reviews and has to date received a total 16 nominations from ‘The Best of Nollywood Awards’ 2011, Abuja Film Festival 2011 and AMAA 2012. ‘TWO BRIDES AND A BABY’ also bagged 5 awards at the Best of Nollywood Awards in 2011, including awards for Best Director, Achievement in Sound, New Female Act, Best Screenplay and Movie of the year. The main cast and crew were in attendance and also at an exclusive after party at Cream Ultra Lounge (home of The African Experience) located at 3249 Buford Hwy, Atlanta, GA 30329. More details at www.snapflix.net.

SnapFlix founders, Deji Eniojukan and Jide Akanbi say “This is a grand landmark for Nollywood and the beginning of a new revolution of film in African Entertainment Industry. We are meeting the entertainment needs of Africans and lovers of Africa in the diaspora, a need for a cinematic presence of Nollywood movies in North America. Launching a structured distribution of Nollywood films to American cinemas is filling a major gap in the industry, this is also key to ensuring the producers and content owners are able to recover quality returns thereby encouraging investment in the Nollywood Industry based on the performance of these quality films in American cinemas.

It’s a big breakthrough and it’s been a long journey, but we are excited about the future of Nollywood and we’re glad to be part of it”. Producer of TWO BRIDES AND A BABY; Blessing Egbe says “There is a proverb that goes ‘when one door closes, another opens’. I am excited that a new door has opened for Nollywood films in the US via Snapflix distribution. These are a new crop of distributors with good intent for content owners. They have unlocked the strong doors of some US theaters and I hope that thousands of Nollywood fans and supporters will walk through these doors to enjoy the selected movies showing in these theaters.

Producers will no longer face the problem of selling their content to some persons who take advantage of the laxity in mainstream distribution in the diaspora. I am happy for the innovation and look forward to the launch. I am even happier that my film is the one that will launch the series, Glory be to God!”

ABOUT SNAPFLIX/ THE NOLLYWOOD CINEMA SERIES

SnapFlix is a distributor of African and Caribbean media based in Atlanta, GA. A media and entertainment company with operations in USA and Africa, we distribute movies via multiple channels including theaters, online rentals and sales, wholesale to retail outlets, and streaming rights sales to legitimate online streaming companies for African and Caribbean content. SnapFlix is the media and entertainment subsidiary of Sinet Technologies Inc. (www.sinettechnologies.com), a global technology and media conglomerate with operations in US,Canada, Caribbean and Africa.

SnapFlix Inc – Bringing the world to a big screen near you.

FOR MORE INFORMATION OR PRESS INQUIRIES –