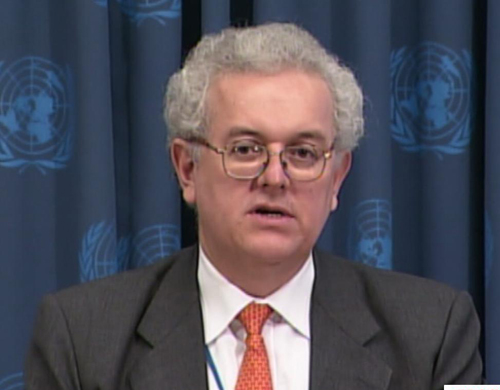 I want to say a big thank you to Antonio Ocampo for disregarding his bid for the presidency of the world bank. This leaves the contest between Dr. Ngozi Okonjo Iweala and president Obama‘s nominee, Jim Yong Kim. I wish Oprah could read this and tell me how she feels as an accomplished woman who wept the day the day Obama became president of the United states.

This is not about Dr. Okonjo-Iweala, it is about change for the better, change because it demonstrates openness and transparency, change because it is the right thing to do , change because the US ought to allow for an election to the most important institution in the world, the World Bank to be based on merit and set a remarkable example, change because she is the only non-American female who is qualified and Jim Young‘s experience pales before hers.!!

I do not mean his paper qualification, I mean his experience. EXPERIENCE is what the World Bank needs. The developed world seemed more ready to dump ideas and Aids on Africa rather than make Africa a worthy partner in global governance. This has got to come to a screeching halt because the more developed countries we have in the world, the better for World Bank.

I say to the Europe and and those countries that want to blindly follow president Obama , and especially the US to wake up and have rethink. Please do not set a precedent that you cannot defend before generations born and yet unborn.

The out dated practice of having an American only lead the World Bank and a European lead the IMF is absolute nonsense and has no place in today’s fast paced world anymore. The day Obama became President meant that the Americans saw this: change has come and an American who happens to be white must not occupy the WHITE HOUSE, an African American whose father is from Kenyan is qualified to do so. We see his vision and we are ready to follow him. 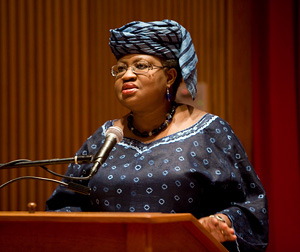 Prior to her ministerial career in Nigeria, Okonjo-Iweala left her position as vice-president and corporate secretary of the World Bank Group to join President Obasanjo‘s cabinet as Finance Minister on 15 July 2003, determined to make developing countries play remarkable roles in decisions that affect them instead of being silent observers.

Although some controversy surrounded Okonjo-Iweala’s appointment as Finance Minister, she left that administration at the end of August 2006. On October 4, 2007, World Bank President Robert Zoellick appointed her to the post of Managing Director, effective December 1, 2007.

In 2011, Okonjo-Iweala was reappointed as Minister of Finance with the expanded portfolio of the Coordinating Minister for the Economy by President Goodluck Jonathan. She took a lot of heat, more-so than any other government official for the unpopular fuel subsidy removal policy by the Nigerian government which led to Occupy Nigeria protests in January 2012.

Dr Ngozi Okonjo-Iweala left a record of debt-forgiveness, -the only finance minister to have done so. The then senator Obama was very skeptical at the suggestion of debt-forgiveness from the Paris club. She buttressed her opinion with remarkable points and persuasive arguments. The whole was convinced.

This is a woman who poverty motivated to be all she could be; her gender notwithstanding. Obama knows about determination and going for what you believe in, his wife, Mitchell knows that too. I really think president Obama should uphold the American values among which decisions based on merit is one.

This decision has operated since 1940s. Things have changed since then and we all know it. America has block votes in the world bank and America will prove that she is not afraid to say: ‘when the time for change has come, we must bow to it’ This is what your children will be proud of president Obama, this is what your wife as an accomplished woman will be proud of – You stood up to be counted when it mattered the most.

Real power is the ability to retrace your step when no would have been easier. Indeed, it is time that a woman, who is also, a naturalized U.S citizen, an African with a proven track record on international problem-solving skills and happens to be a woman becomes the president of the world bank.

How will you and Mitchell feel if Sasha one day qualified for a position but was told that the position has been informally agreed to be occupied by non-Americans and men? We are talking about her effectively shedding more light on the problems in developing countries.

I believe that she will encourage direct investments, help remove infrastructural problems by enabling funding into infrastructure and above all the electricity problem that has bedeviled Nigeria for so long-popularly referred to as POWER. It is time that Africa as a continent rises.

Nigeria has done so much in terms of securing peace in Africa. We are still faced with challenges even just now. Some international interest groups definitely benefit from the problems of most developing countries. Why can’t we be great as a continent?

Why can’t we be in a position to do business on equal and mutually benefiting terms with the rest of the world? Why must we be notorious for poverty, disease, hunger and underdevelopment? Women have the numerical strength but lack the corresponding positions of higher responsibilities like the men? Men and women are co-partners in governance.

An only woman who is highly qualified in the person of Dr. Ngozi Okojo-Iweala deserves to be the next president of the World Bank.