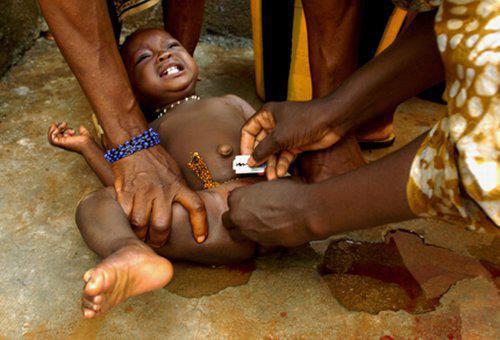 What if I Refuse?

By Menassah Imonikebe, a well-known Nigerian painter from Edo State, he has many solo and group exhibitions to his credit

The Ugly Hand that Maims

By Wande George, born in 1962, he earned the N.H.D. at Auchi Polytechnic in painting and illustration. Wande George presently works as a visualiser/illustrator at Lintas: Lagos, Nigeria‘s best known advertising agency. He has participated in several group exhibitions.

According to the World Health Organization, the most common type of female genital mutilation is excision of the clitoris and the labia minora, accounting for up to 80% of all cases: the most extreme form is infibulation, which constitutes about 15% of all procedures.

The WHO estimates that, around the world, between 100 and 132 million girls and women have been subjected to female genital mutilation. Each year, a further 2 million girls are estimated to be at risk. Most of them live in 28 African countries, a few in the Middle East and Asian countries, and increasingly in Europe, Canada, Australia, New Zealand and the United States of America.

There was this girl, a friend of mine, named Vokke who I went to school with. She hails from Delta State Nigeria. I remember, she got circumcised at  the age of 12 by her parents. Vokke went through a gruesome ordeal, like the little girls in the video, you are about to watch. Vokke was cut with an unsterilized sharp object without anesthetics, after which she suffered numerous infections. She almost lost her life.

How can the process of putting an end to female genital mutilation be accelerated, especially when victims do not speak out against it because of family or religious traditions? One way is by encouraging men to take action alongside women to challenge religious, cultural and traditional arguments used to justify this practice.

On March 4, a new game on Facebook, inspired by the book “Half the Sky: Turning Oppression into Opportunity for Women Worldwide,” will be introduced, with a focus on raising awareness of issues like female genital mutilation and child prostitution.

Half the Sky Movement: The Game, more than three years in the making, is one of the most ambitious efforts yet to entice a mass audience to social media games with the goal of social change. It is a concept, however, that even its supporters say is largely untested.

The game seeks to engage new audiences not reached by the 2009 book, written by the married team of Nicholas D. Kristof, a columnist for The New York Times, and Sheryl WuDunn, a former Times journalist.

1 thought on “Female Genital Mutilation – What You May Not Know”