The author traced the history of Nigeria‘s shipping sector from the precolonial era to the present time and concludes that a lot more needs to be done if meaningful development of the sector is to be attained.  This book is available on Amazon http://www.amazon.de/Arrested-Development-Journalists-Nigerias-Inconsistent/dp/1477238212

For more info about the author, visit http://www.bolajiakinola.com/

A South African woman working as a blood technician with the South African Blood Transfusion Service, during which time she met and treated many rape victims. The device, known as The Rape-aXe, is a latex sheath embedded with shafts of sharp, inward-facing microscopic barbs that would be worn by a woman in her vagina like a tampon.

If an attacker were to attempt vaginal rape, their penis would enter the latex sheath and be snagged by the barbs, causing the attacker pain during withdrawal and (ideally) giving the victim time to escape.
The condom would remain attached to the attacker’s body when he withdrew and could only be removed surgically, which would alert hospital staff and police. This device could assist in the identification and prosecution of rapist.

South African inventor Sonette Ehlers demonstrates her new anti-rape female condom in Cape Town. The device, concealed inside a woman’s body, hooks onto a rapist during penetration and must be surgically removed. Ms Ehlers said the rape trap would be so painful for a rapist that it would disable him immediately, enabling his victim to escape; but would cause no long-term physical damage and could not injure the woman.

The United Nations says South Africa has the world’s highest per capita rate of reported rapes – 119 per 100,000 people. Analysts say the total, including unreported rapes, could be nine times higher. A majority of women surveyed said they were willing to use the device, which will go into production next year and sell for one rand (20 cents). 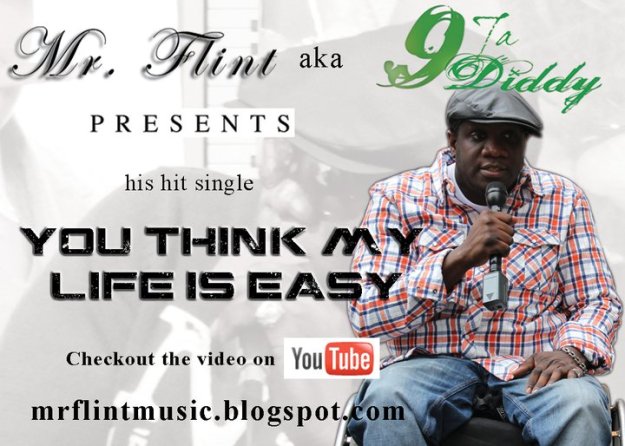 Leroy Bamidele Fagbemi, “aka” Mr. Flint” is an American based Nigerian entertainer, born to the Fagbemi family of Lagos. He is also, an advocate for people with disability for a good reason.  Leroy Bamidele Fagbemi, sustained a spinal cord injury from a road accident, late 90’s in the United States (USA), which confined him to the wheel chair, not giving up his dreams, he returned to his first love, music.

As a successful hip hop artist, Mr. Flint is back with good news for the physically challenged, his foundation “Second Chance in Life”  is an organization that is all about helping  people with disabilities to discover their passion and help them achieve their dreams in whatever career they want to pursue. Fagbemi’s  new video “You think my life is easy”  shows a young man, who deals with everyday challenges but not deterred.

In my conversation with Mr. flint, he expressed his frustration with celebrities, artist and governments in Africa for not doing enough to bring awareness about disability, especially in Nigeria, where people with disability are often discriminated against or seen as liabilities. ” Handicaps are humans beings, they do what normal people do, but the difference is that they can’t walk”.

As for any his future projects, Mr. Flint’s goal is to see that the Nigerian Government gets involve in disability awareness campaigns and foundations, provide adequate rehabilitation facilities and infrastructures to ensure that people with any form of disability live a normal life, learn life coping skills and are accepted by society.

He emphasized, how such programs has helped him to become independent. However, Leroy Bamidele Fagbemi, believes that appealing to corporate organizations and Nigerians in the diaspora is key to supporting his pet projects in Nigeria. For more information, contact Mr Flint at http://facebook.com/lfagbemiskinnyjoe

Facts About Disability in Africa

According to The World Bank, 20% of people with disabilities make up the poorest of the poor, which translates to approximately 260 million people with disabilities living in absolute poverty.  The unprecedented level of poverty among this group and the associated hunger leads to Malnutrition, which in turn can result in a number of disabilities, such as stunting, blindness, and diabetes. Also, hunger is a driving force, which push disabled persons into street begging. Generally speaking, disabled people are seen as ‘good for nothing’ and they suffer severe psychological problems in Africa.

The World Health Organization (WHO) estimated that about 500 million people live with disability worldwide, with about 75% living in the developing countries (Mickailakis, 1997; Lang and Upah, 2008). In Nigeria, WHO estimates put the number of people with disability at 19 million or approximately 20% of the country’s population (Lang and Upah, 2008).

Nigerians living with disability are no better off when compared with others living in other parts of the developing world, in terms of the challenges they face — they are poor, marginalized and excluded (The Guardian, April 12, 2009; Lang and Upah, 2008).

Despite the declaration of full participation in the disability agenda of the United Nations by the Nigerian government, Nigerians with disabilities are still faced with these challenges (The Guardian, April 12, 2009; Michailakis, 1997). A recent review of disability issues in Nigeria identified many factors why the disability agenda continues to suffer.

Notable among them were: the absence of disability discrimination laws, lack of social protection, poor understanding of disability issues by the public, and poor access to rehabilitation services. The report recommended, among others, the collection of robust and reliable data, and advocacy for the passage of the disability bill into law (Lang and Upal, 2008).